Myasthenia Gravis (pronounced My-as-theen-ee-a Grav-us) comes from the Greek and Latin words meaning “grave muscular weakness.” The most common form of MG is a chronic autoimmune neuromuscular disorder that is characterized by fluctuating weakness of the voluntary muscle groups. The prevalence of MG in the United States is estimated to be about 20/100,000 population. However, MG is probably under diagnosed and the prevalence may be higher. Myasthenia Gravis occurs in all races, both genders, and at any age. MG is not thought to be directly inherited nor is it contagious. It does occasionally occur in more than one member of the same family. 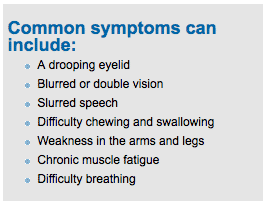 Antibodies are proteins that play an important role in the immune system. They are normally directed at foreign proteins called antigens that attack the body. Such foreign proteins include bacteria and viruses. Antibodies help the body to protect itself from these foreign proteins. For reasons not well understood, the immune system of the person with MG makes antibodies against the receptor sites of the neuromuscular junction. Abnormal antibodies can be measured in the blood of many people with MG. The antibodies destroy the receptor sites more rapidly than the body can replace them. Muscle weakness occurs when acetylcholine cannot activate enough receptor sites at the neuromuscular junction.

Your login information was incorrect. Please try again or click here to have your information emailed to you.